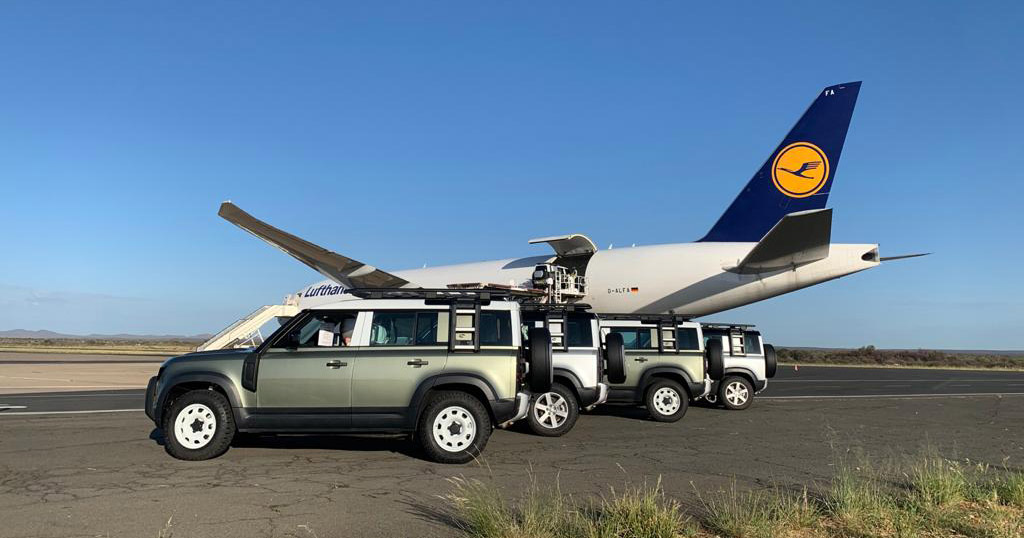 Jaguar Land Rover chartered a Cargo Boeing 777 from Lufthansa. The flight arrived on the 7th Feb at 07:00 at Hosea Hutako from Frankfurt Intl. Destuffing started at 07:30 and was managed by Transworld Cargo. Seventeen Land Rovers, each with its own carnet, was completed within 90 minutes.

These are all 2019 models, straight out of the factory. The custom’s inspection was completed at about 10h30 and the JLR team, who arrived from the UK the previous day, took possession of the vehicles.

The vehicles were then driven to Opuwo Country Lodge for their official launch. 50 International media representatives from Magazines such as CAR, AUTO MOTOR SPORT, 4×4 etc will be test driving them over the next 4 – 6 weeks. The Land Rovers will be shipped back to the UK towards the end of March where they will be taken apart for further evaluation.

In addition to the above, another three 40′ GP were imported as well as 11 pallets with spare parts and three further Land Rovers via Johannesburg.

Find out more or adjust your settings.

This website uses cookies so that we can provide you with the best user experience possible. Cookie information is stored in your browser and performs functions such as recognising you when you return to our website and helping our team to understand which sections of the website you find most interesting and useful.

Strictly Necessary Cookie should be enabled at all times so that we can save your preferences for cookie settings.

If you disable this cookie, we will not be able to save your preferences. This means that every time you visit this website you will need to enable or disable cookies again.